Have you ever sat in one of your favourite TT spectating spots and wondered about the name on the nearby signpost? Or the funny-sounding names that feature on many of the famous orange course signs? Ballaugh, Cronk y Voddy, Ballacraine; they’re all so familiar, even to those listening from overseas. But what do they all mean, and where did they come from? We decided it was time for a virtual lap of the TT Course with Culture Vannin to find out more.

One of the most common prefixes you’ll see around the course is Balla which translates from Manx to ‘place of’ or ‘farm of.’ Ballagarey (or Balley y Gharee for its original spelling) translates as ‘place of the garden,’ which seems all together more peaceful than Glen Vine on Senior Race Day. Although we’re not entirely sure what this refers to, there are more Ballagarey’s to be found around the island, suggesting that early Manx people visited the ‘garden place’ for their weekly ingredients. The only thing scary about Ballagarey, therefore, is taking it in 5th gear - or perhaps watching from one of those gardens!

Something that many don’t realise is the prevalence of Old Norse in the Isle of Man. The language was originally brought over by the Vikings and is still found on the TT Course today. One easy giveaway of a Norse name is the ending ‘by’ as in Sulby or Crosby. This ending is something that our many friends from Yorkshire will also be familiar with! Sulby, although now famous as the fastest part of the course thanks to its long straight, has a name stemming from a fork in the river. Whilst this fork is no longer evident today, competitors still have to cross the river using Sulby Bridge. Similarly, Crosby refers to the ‘place of the crossroads,’ meaning that the next time you decide to stop off for a pint in The Crosby, you’re actually supping in ‘The Crossroads’.

After we pass through Greeba (Norse for Peak), we arrive at Ballacraine. This is another example of Balla, only this time it refers to one of the traditional farming families of the island (The Craines). With the racers still sweeping past the entrance to the farmyard today, the association here is clear to see, but there are many other farming families that lend their names to parts of the TT Course, which are perhaps not so obvious: Ballahutchin, Ballacobb and Ballacrye, for instance.

When not associated with a family name, the Manx tended to ‘name it as they see it’. Examples of this no-nonsense approach include Ballamoar, which creatively translates as ‘big farm’ and provides the name of the campsite at Ballaugh – a firm favourite of TT fans! Incidentally, the opposite of Ballamoar is Ballabeg. Found close by to Ballabeg Hairpin on the Billown Course in the south of the island, Ballabeg simply means ‘little farm’. 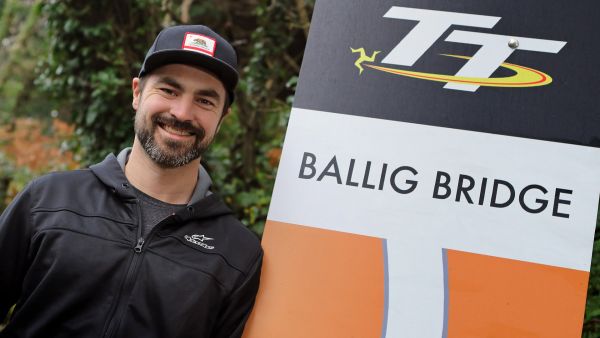 Rennie Scaysbrook, pictured at Ballig, or ‘farm of the hollow’. This hollow is now home to the Tynwald Mills shopping centre!

Another popular prefix on the Isle of Man, Cronk comes from the Manx word for hill and it can be found at numerous places around the TT Mountain Course. Cronk y Voddy, although known to TT fans as one of the best places to see competitors at high speed, was originally associated with something rather more sedate: either an old man or a dog. Some linguists argue that Voddy is derived from v (of the) moddey (dog), which you might recognise from the folklore tale of the Moddey Dhoo – the Black Dog that haunted / haunts Peel Castle! It would certainly be more fitting, considering the Moddey Dhoo also lends its name to the local motorcycle club.

One name with a possibly more significant origin is Cronk Urleigh, found near Kirk Michael, which translates to ‘hill of advice’ or ‘hill of wisdom’. This name comes from the hill’s use as one of the original Tynwald Courts of the island, where the leaders or kings would have passed the laws of the land in the 1400s. The site has moved around over the years, however, and many visiting fans will have already discovered today’s Tynwald Hill in the village of St John’s. We’re not sure how much wisdom is proffered here, but this site does mark the site of the start of the very first motorcycle TT, with Rem Fowler and the rest of his chums pushing off from outside the Tynwald Inn.

Though now known as the place to see riders leaping over the bridge, Ballaugh’s name originally comes from a geographical feature that no longer exists. Ballalaughe, as it was known in the 1200s, was named after a nearby loch, or lake, which has dried up over the years, but lives on through old maps of the island - one of which you can see at the House of Mannanan visitor attraction in Peel. A few miles north of Ballaugh, you can find the former home of Norman Wisdom – the famous comic and film actor who made a home here on the Isle of Man. A fan of local motorsport and a keen supporter of the TT, he named his house Ballalaugh (place of the laugh). 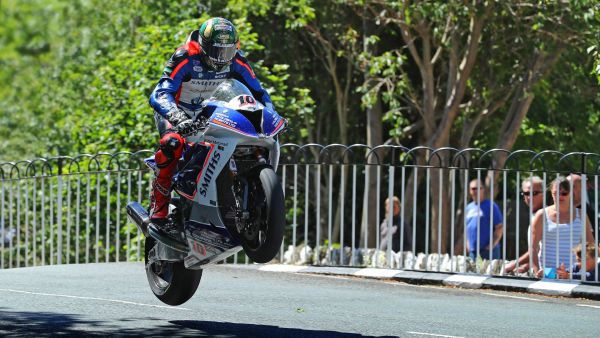 Peter Hickman jumping over the Ravensdale River at Ballaugh (place of the loch).

Another famous Norse name, and an integral part of the TT, is Snaefell, which simply means Snow Mountain. Though it’s less likely to see snow on the peak today, those of you who have spent a chilly day waiting for the races to start can imagine how uninviting it can still be in winter. Dominating the section of the TT Course that includes iconic corners such as The Verandah, Graham’s Memorial and The Bungalow, the sometimes-snowy peak has given rise to a handful of other monikers and nicknames including, of course, ‘King of the Mountain’. In fact, a statue of Joey Dunlop stands proud on these very slopes and is a must visit for all serious TT fans.

Marking the highest point of the mighty TT Course, Brandywell, also known as Chibbyr y Phunch or Chibbyr Slieau Maggle, has long been a popular spot for spectating, providing spectacular views of both the island and the racing.

The name Brandywell, according to local legend, comes from an American farmer named Brooks who moved over to the island to live in Druidale. Brooks, eager to one-up some boastful visitors from his homeland, sent one of his farmhands up to the nearby well to pour in some brandy. When the visitors tasted what came out of the well, they had to admit that they’d never come across anything like it and thus the ‘Brandy Well’ or ‘Chibbyr y Phunch’ (well of the punch) was born. Perhaps those marshalling at this spot know something we don’t?

The other name for Brandywell, Chibbyr Slieau Maggle, has a less appetising origin, however, with Slieau Maggle translating to ‘mountain of the testicles.’ This eye-catching name, according to passed down knowledge, is due to the hill’s traditional use as a place for castrating sheep. We’re unsure why our colleagues in Tourism don’t advertise this one!

One of the most famous and most popular locations on the TT Course, Creg ny Baa, found between the 34th and 35th Milestones, translates to English as the ‘rock of the cows.’ It doesn’t take a great deal of imagination to see why, with its surrounding fields criss-crossed by rocky lanes and back roads. Incidentally, the suffix ought to be pronounced ‘Bare’, not ‘Bar’ – although it does seem too late to change after 110 years of spectating here! 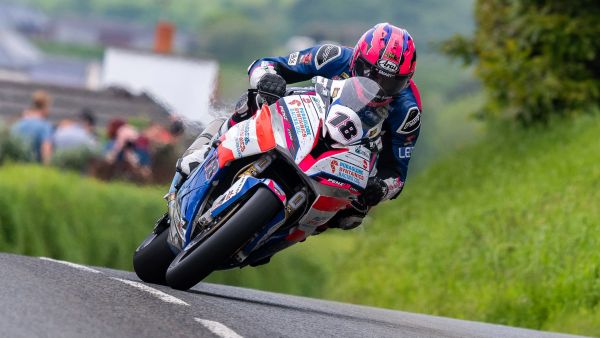 Hillberry, or Cronk y Berry, is one name which provides an interesting glimpse into the bilingual nature of the island’s history. Cronk, as we know, means ‘hill’ in Manx. Yet Berry, as we are about to find out, also means ‘hill’ and comes from our Viking friends. This unusual translation, ‘hill of the hill’, would have come from residents not realising that the place they called Berry was already referring to the hill, thus feeling the need to add their own description on top of the existing one.

Exiting Cronk y Berry, we shortly arrive at Cronk ny Mona. With the ‘light on’ for the end of our lap, there’s just enough time to note that Cronk ny Mona translates as ‘hill of the turbary’, a place where people would go to dig up peat for burning in their homes. The only burning going on here today, however, is of the round black rubber variety, and that’s how we like it!

We would like to thank our friends at Culture Vannin for their assistance - and for debunking our own theory that Hillberry was named after a local witch. Still, we got the Black Dog in the story! If you’d like to go home with more fabulous Manx factoids, why not visit their premises in St John’s the next time you’re on the island? With a front door that practically opens out onto the old 1907 TT start line, the Culture Vannin team are well placed to assist you with any more sleuthing. It could be the most surprising part of your pilgrimage!