The 23-time TT winner has a long and illustrious career with the iconic Japanese brand and – in McGuinness’s own words – ‘the stars aligned’ in 2022, as he returned to the TT with the Honda Racing team for his 100th race onboard the Honda Fireblade that celebrated its own 30th anniversary.

Speaking about the Fireblade, McGuinness said: “It’s an awesome bike and has meant so much to me over my career. And, if I think about it, to so many other riders over the last 30 years too. I’m proud of my connection with its place in TT history and of this, my replica. There is no event like the Isle of Man TT in the world and this motorcycle celebrates Honda’s, and my own part, racing in it. That feels good - really good.” 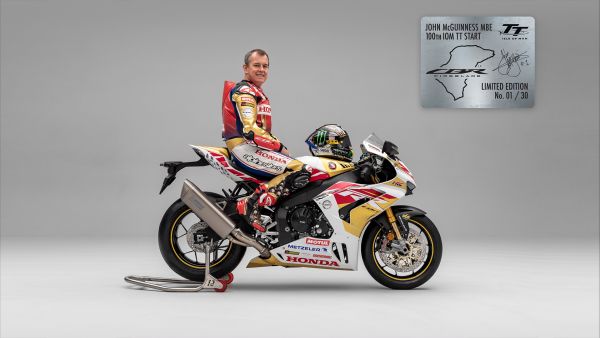 Only 30 of the replicas will be produced, with each one featuring the special gold detailing and film strip that shows images from each and every one of his 100 TT starts. An individually numbered plaque will adorn the headstock, and John’s signature crowns the airbox cover. Lucky purchases will also receive a laser-engraved crystal featuring a design of the 100th Start Replica, and will also be given the opportunity for a personal handover from McGuinness himself at Honda Racing UK headquarters in Louth.

One of the limited-edition bikes will be on display at the Honda stand throughout the upcoming Motorcycle Live show at Birmingham’s NEC, for which Isle of Man TT Marshals are given free admission to.

Priced at £30,000, all enquiries and orders for the John McGuinness CBR1000RR-R Fireblade SP 100th Start replica are to be via the Honda dealer network.