Today, in the Monster Energy Supersport TT Race 2, Michael Dunlop became the most successful 600cc rider ever at the Isle of Man TT Races fuelled by Monster Energy, as he claimed his ninth supersport win, his 21st TT win overall.

Riding the MD Racing Yamaha, Dunlop was locked in battle all race, again, with Peter Hickman (K2 Trooper Beer by PHR Performance) but edged away on the second and final lap to eventually take the win by 3.2 seconds, whilst Dean Harrison (DAO Racing Kawasaki) finished in third. 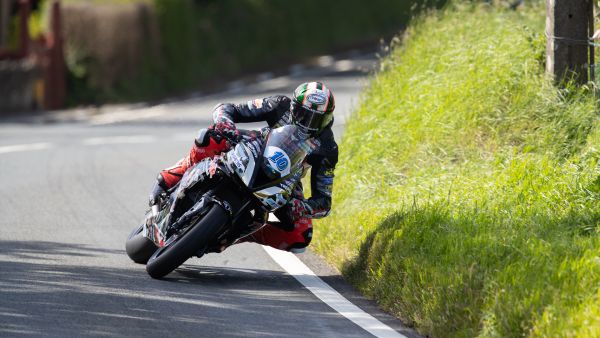 HICKMAN GOES HEAD-TO-HEAD WITH DUNLOP FOR THE TOP SPOT

With a few damp patches around the course and windy conditions all round, it was Dunlop who led through Glen Helen first time around but only just with Hickman only 0.158 seconds in arrears whilst Harrison was third, a further 1.9 seconds behind. Davey Todd was another 1.2 seconds back in fourth on the Milenco by Padgett’s Motorcycles Honda closely followed by Jamie Coward (KTS Racing powered by Steadplan) and Lee Johnston (Ashcourt Racing) with two seconds covering the trio.

By Ballaugh, Dunlop had stretched his advantage over Hickman to 0.465s and Harrison had lost more ground, the Bradford rider 3.3s behind Hickman. Coward had moved up to fourth, albeit by half a second, from Todd and Johnston.

Rounding Ramsey Hairpin, Harrison still led on the road but although he continued in third, he was slipping further back on time and was now 6.4 seconds behind race leader Dunlop. The gap to Hickman in second place was only half a second as they made the Mountain climb for the first time. Coward had doubled his advantage to Todd and it was now James Hillier (RICH Energy OMG Racing) in sixth. 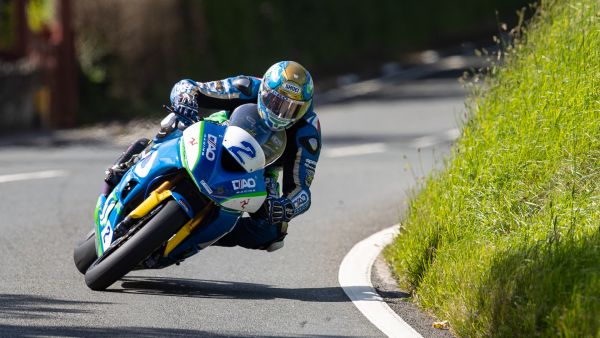 With an opening lap of 126.655mph, Dunlop led Hickman by 0.57 seconds with Harrison now 9.9 seconds further back in third. Todd had moved back up to fourth but was only a tenth of a second ahead of Coward and with Johnston retiring at the pits, Cummins slotted into sixth place. Hillier, Dominic Herbertson and Mike Browne followed in hot pursuit.

Sweeping round Glen Helen on lap two and with less than thirty miles to go, Dunlop had extended his lead to 1.8s as Hickman continued to work his way through traffic. Harrison was 9.5s adrift in third and, in turn, was 13.4s clear of Todd who’d added another second to his advantage over Coward. Cummins continued to circulate in sixth with Hillier, Herbertson, Browne and James Hind now the running order behind.

Back at the front, as the riders leapt Ballaugh Bridge, Hickman pegged the gap back to 1.3 seconds with both riders on lap record pace, the duo repeating their battle of the Supertwin race from two days earlier. It looked to be a two-horse race with Harrison almost 11 seconds behind in third. Todd had also strengthened his hold on fourth with the gap to Coward up to two seconds. 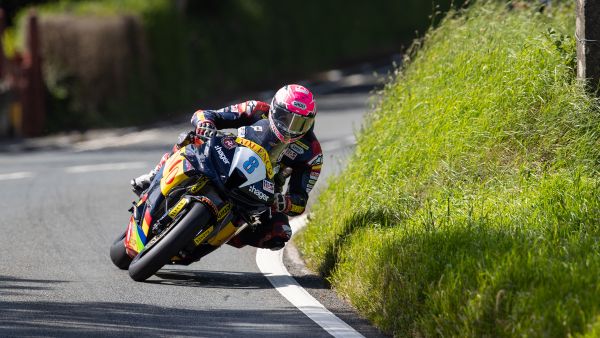 TODD GETS AHEAD OF COWARD, SECURING A FOURTH PLACE FINISH

All eyes were on the battle for the lead though and at Ramsey, Dunlop had responded to Hickman’s charge with another three tenths of a second added to his lead, the difference between the two only 1.6 seconds as they headed up Snaefell for the final time.

At the Bungalow, Dunlop had increased his lead further to 2.7 seconds and with the fastest lap of the race, 128.536mph, he took the win from Hickman by 3.2 seconds as Harrison duly completed the race in third, the position he’d held all race.

Todd maintained fourth place to the end, his eventual margin over Coward 6.4 seconds, with Cummins in sixth ahead of Hillier, Herbertson, Browne and Paul Jordan. Hind just missed out on the top ten in 11th with Rob Hodson, Ian Hutchinson, Michael Evans and Michael Sweeney completing the top 15.